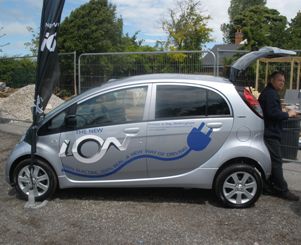 Organised by the Lambley Parish Plan Group and local MP Mark Spencer, the event was held at Floralands Garden Centre in Lambley, owned by Spencer. One of the highlights was a fully electric car made by Peugeot, the iOn. This zero-emission four-seater has a claimed top speed of 80mph, and a range of over 90 miles on one charge.

Also exhibiting was local green fuel producer Phoenix Fuels. The company, based at Rufford, produces biodiesel and displayed one of its lorry units on the day. It had on sale briquettes made from compressed oilseed rape waste, which it says are ideal for chimneas, open fires, or log burners.

Gedling Borough Council had a presence to give advice on recycling and how best to dispose of waste.

Margaret Meadows, a member of the organising committee, said: “The day has been a great success, and I think those people who came had been able to learn a lot”. Mark Spencer added: “it has certainly has given me food for thought about how I might be able to lower my own energy bills at home”.

Solar panels, turbines, and fuel made from farm waste were among the displays