Controversial plans for a crematorium on Catfoot Lane in Lambley will be subject to a new judicial review, dumbles.co.uk has learned. 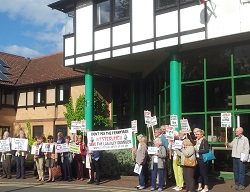 Local opposition to crematorium plans has been vociferous

The hearing has been scheduled for early February 2016 in Birmingham, and is expected to last two days.

Crematorium developer Westerleigh was granted planning permission by Gedling Borough Council in June 2015, despite substantial local opposition, after first launching its plans in 2012.

The long-running saga has seen the council first grant permission, then have to revoke this when challenged at judicial review and at the Court of Appeal, only for it to again grant permission again for a modified proposal.

This latest twist could see the development, which is on green belt land near Mapperley Plains, finally laid to rest.

The challenge will focus on a number of contentious points in the council’s decision to grant permission. These are understood to include the validity of the claimed need for a crematorium, the interpretation and application of the National Planning and Policy Framework, and the weight given to the outcome of the public enquiry and the appeal from AW Lymn.

Anti-crematorium protesters hope the judicial review will find that the council’s decision was unsafe for any of these reasons, quashing the project forever.

This hearing will be the last line of defence against the development, which would be expected to start quite quickly if the judicial review finds in its favour.