MARK Spencer has been the member of parliament for Sherwood, which includes Lambley and Woodborough, since 2010. With a general election on 12 December 2019, voters have a chance to award him a fourth successive victory, or sack him in favour of a candidate from another party. How has Mark Spencer performed in his nearly ten years at Westminster? 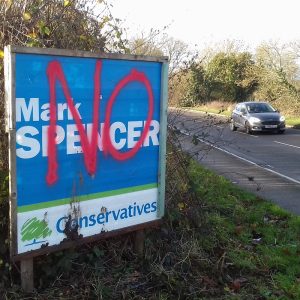 Not universally liked, even in his home village of Lambley

His voting record in the House of Commons, as summarised on They Work For You, has been aligned with the hard right of the Conservative party.

On the vexed subject of Brexit, Spencer initially campaigned to remain in the EU but has since become the chief enforcer of Boris Johnson‘s drive towards a hard no-deal Brexit. Johnson’s first appointment on taking office earlier in 2019 was to make Mark Spencer the government chief whip, responsible for discipline among the party’s MPs.

If Boris Johnson is Draco Malfoy, Mark Spencer is his chief bully Gregory Goyle (and of course the Conservative party are Slytherin).

It was Mark Spencer and Jacob Rees-Mogg who were dispatched by Johnson to Balmoral, to require the Queen to dissolve parliament (the prorogation). This action was deemed unlawful and overturned by the Supreme Court, and the information given to Her Majesty by Spencer and Rees-Mogg deemed untrue.

As chief whip, it was Mark Spencer who kicked 21 Conservative MPs out of the party for refusing to support Boris Johnson’s hard Brexit proposals – including such party luminaries as Rushcliffe MP and Father of the House Ken Clarke – a former Conservative Chancellor and Home Secretary. In doing this he single-handedly wiped out the government’s slim working majority.

Whether you view Mark Spencer as a local boy done good, or the evil henchman of a despotic megalomaniac who has improbably found himself in a position of power, you have your opportunity to make your voice heard this week.

The Sherwood constituency is a two-horse race, with only Conservative and Labour having any chance to win. Candidates from the Green Party and the Liberal Democrats are also standing, as is an independent candidate. But remember that between them Labour and Conservative took 93 percent of the votes in 2017 and over 80 percent in 2015.

To unseat mark Spencer would require less than five percent swing, much less than the eight percent swing that took Spencer to Westminster in 2010. Polls are open from 7am to 10pm on Thursday 12 December 2019.