A BID for Olympic glory by local swimming star Rosie Rudin has been given a boost with the donation of a car by local Peugeot dealer John Harrison (Lowdham) Ltd. 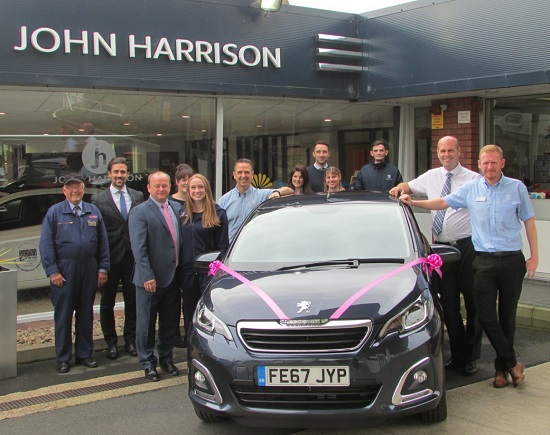 The team at John Harrison tell dumbles.co.uk they are delighted to provide the 19 year-old with free use of a brand new Peugeot 108 Allure for a 24 month period, helping her bid to make Team GB for the 2020 Olympic Games.

Rosie, from Woodborough, is an elite swimmer and part of the World Class Podium Potential Squad with British Swimming. She is the current world junior record holder in the 400m individual medley. She is a world junior champion, World School Games Champion, two time British record holder, and the winner of multiple senior British and international medals. Rosie has also previously been awarded the Nottingham Post Student Sportsperson of the Year and Overall Student of the Year.

She undertakes ten pool sessions each week, with a wake up call at 4:45am for her morning sessions starting at 5:30am. She previously had no transport of her own and relied heavily on friends and public transport in order to get to training and competition venues.

“To be given this fantastic opportunity of the free use of a car by Duncan Betts of John Harrison Peugeot (Lowdham) has enabled me to have the independence I need to get to my scheduled training sessions reliably and safely, to realise my ambitions and to take my career to the next level” said Rosie.
Other local businesses supporting the young swimmer include The Lord Nelson, which kindly donated a meal voucher for Rosie and her mum.