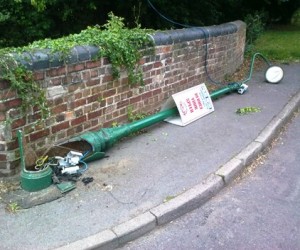 There is something slightly ironic in the fact that the lampost at the corner of Church Street and Main Street, Lambley, which has been knocked over, was carrying a warning sign: Police Notice – Community Speed Watch Area – Reduce Your Speed.

The lamppost seems to have been knocked over sometime on the afternoon of Tuesday 20 July. We don’t really know what happened, except that it appears to have been hit by a vehicle turning off Main Street and into Church Street. The post was fixed to the pavement just a couple of inches from the brick wall, so it would seem the vehicle must have mounted the pavement and only just avoided a more serious collision. 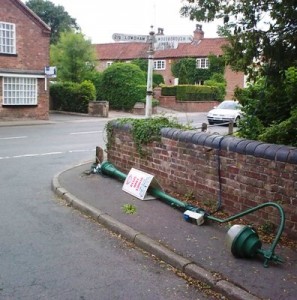 Help us piece together what happened

Can you help us piece together what happened? Did you see the incident or where you involved? Did you take a picture? Help us share the information – leave a comment below or email the editor (editor@dumbles.co.uk). All information received in the strictest confidence.

The lamppost at the corner of Church Street and Main Street has been replaced with a new item, apparently a reproduction of the original. The new post appeared on Thursday 9 September. 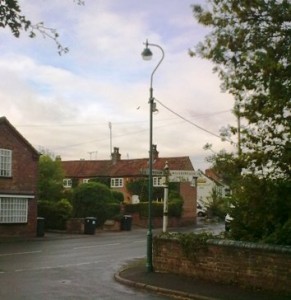