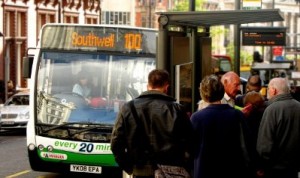 Nottingham City Transport has added a night bus service from the city centre to Burton Joyce, Lowdham, and Southwell following a successful online campaign. The N100 service begins operation this week with departures at midnight, 01:15, and 02:30, on Friday and Saturday.

Buses pick up at King Street (stop K1), Victoria Centre (V2) and Boston Street, and run non-stop to Nottingham Road in Burton Joyce. They then call at all stops through to Southwell. The non-stop portion means the service should not fill up with short-distance travellers.
Single journeys cost £5, although a £6 Network Rider return can be bought on the bus.

The addition of the service follows a campaign on Facebook, with the creation of a group called NCT Pathfinder N100 – we want a night bus! The page, created by Lowdham resident Roxie Hickling, attracted over 780 members and appears to have been decisive in the re-establishment of a night bus.

In March, NCT wrote to Hickling that the previous service had been discontinued after “regular assaults on our drivers and vandalism to our vehicles“.

The bus timetable (PDF) can be found here, and Nottingham City Transport’s press announcement is here.