A NEW WEBSITE dedicated to Lambley’s revived Cowslip Sunday celebrations has gone live. The site can be found at http://cowslipsunday.co.uk

The first Sunday in May has been marked in Lambley as Cowslip Sunday for generations, celebrating the arrival of spring and the abundance of cowslips in the fields and hedgerows of the village. In 2010 the Lambley Arts Festival brought new vigour to the event, with a colourful procession through the village, a play – Lambley Jack’s Cowslip Tales – and a ceilidh. 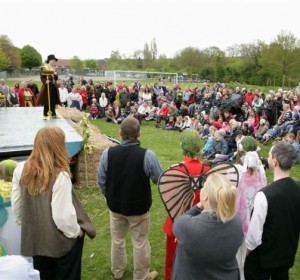 For 2011 the revived Cowslip Sunday is to be expanded. An event in Lambley Church on ‘Cowslip Eve’ – Saturday 30 April 2011 – will be followed by the main celebrations on Cowslip Sunday itself, Sunday 1 May 2011. The procession through the village will be extended, and a new play performed on the playing field behind the village hall. This new play is Lambley Jack and the Giant of Ploughman Wood, and continues the story of some of the now-familiar characters from last year.

New for 2011 is an Arts & Crafts Fair in Lambley Village Hall, giving artists and craftspeople an opportunity to showcase and sell their work. The evening will see the return of the Cowslip Ceilidh in the village hall, with live music, dancing, and refreshments.

More detailed information and background will be provided on the Cowslip Sunday website in the run-up to the weekend, and of course news will also be reported here on dumbles.co.uk