THIS week’s royal jubilee was marked across our area with village parties and celebrations, boosted by the excellent weather on Monday 4 June 2012. 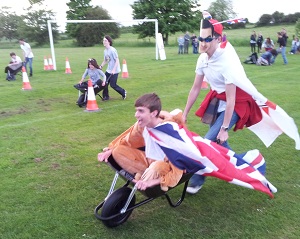 Wheelbarrow racing to mark the jubilee at Lambley

The Diamond Jubilee weekend, marking the 60th year of the reign of Elizabeth II, got off to a shaky start when heavy rain forced the cancellation of Woodborough‘s planned party on the Governor’s Field on Sunday 3 June.

Better weather the following day meant that the Jubilee Party at the nearby Four Bells Inn passed off successfully. Activities here included a hog roast, stalls, and games, while at 10pm the Millennium Beacon across the road on Governor’s Field was lit. 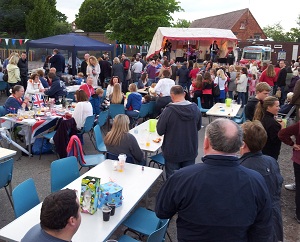 Lowdham‘s main Jubilee celebrations on Monday took on a 1950s theme with fashions and motors on display, while a broad range of activities including games and teas were available around the village hall.

By the reckoning of our team of impartial observers, the Jubilee activities at Lambley set the standard on the day. Starting late afternoon on the school field, activities included space hopper and wheel barrow racing, tug-of-war, and cricket. Live music from local band the Food Doctors complemented the barbecue and beer, until mid-evening when much of the village relocated to the Woodlark Inn for more beer and live music from another local group, the Beaten Tracks. 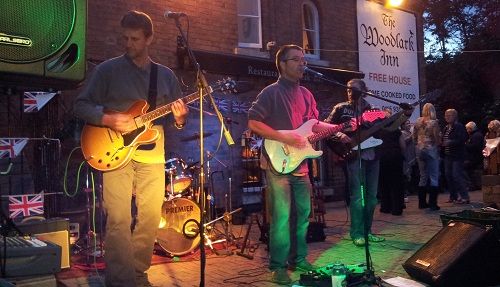 Celebrating until late at the Woodlark with the Beaten Tracks

← Jubilee rained off
Marion makes it from bottom to top →