With well over 100 people attending, the village hall was close to maximum capacity and was reduced to standing room only for late arrrivals.

Lambley parish council chairman Mike Morris welcomed the audience and explained that the meeting was held to discuss the planning application lodged by Westerleigh Group to build a crematorium and cemetery in the village. The company had been invited to attend, he added, but had not responded to the invitation.

Dawn Edwards of the Catfoot Crematorium-Cemetery Opposition Group spoke about the “blot on the landscape” the proposed development would be, and outlined the campaign to deny it planning permission.

In an open floor discussion, a number of reasons to oppose the development were raised. The area is Green Belt, and is designated mature landscape, and there is no actual need for another crematorium or cemetery in the area. 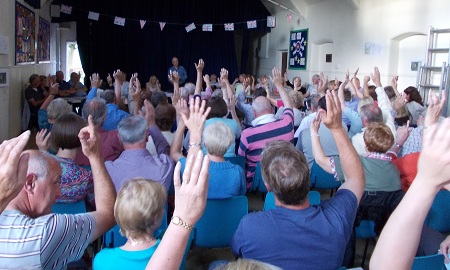 Westerleigh’s documents give the impression that the only existing cremation facilities in the area are at Wilford and Bramcote, and imply that these are exceptionally busy and of a poor standard. In fact they are operating at less than 50 percent of their capacity, said one speaker. Crematoria at Mansfield and Ollerton have been omitted from the documents, added another.

Many expressed concerns about traffic levels in Lambley in general, and on Catfoot Lane in particular. “Catfoot is a lane, not a road, and we’ve measured it at just 4.8m wide in places”, said Dawn Edwards. The junction with Mapperley Plains is already notoriously difficult for right-turners, and the prospect of funeral corteges negotiating these roads made many attendees concerned.

Mike Morris explained that Lambley Parish Council had already written to Gedling Borough Council to oppose the granting of planning permission. In his letter he criticised Westerleigh for its lack of engagement with the community and poor publicity for its meeting held at Mellish Rugby Club in April. He urged Gedling to reject the planning application on the issues of Green Belt and traffic.

Gedling Councillor Roland Spencer has also written to oppose the development, citing “concerns about many aspects” of the plan but specifically hoping that the borough will uphold the principle of presumption against new buildings in the Green Belt.

Sherwood MP Mark Spencer has added his voice to the concerns about Westerleigh’s lack of engagement, and has written to Gedling chief executive John Robinson saying that he cannot “see a difference between this greenbelt application and those which were previously turned down”.

A councillor from neighbouring Burton Joyce parish, which recently succeeded in denying planning permission for two large wind turbines, addressed the meeting about methods of making opposition known. Individual letters opposing the plan, addressed to the planning department at Gedling Borough Council, were the most powerful he said. Each person in a household could legitimately write their own letter, which must be from a named person with an address given, thereby multiplying the number of valid letters (rather than sending one per address). Petitions were of little interest to the planning committee.

The meeting was closed after more than an hour of lively discussion, with a call by Mr Morris for a show of hands. When asked if anybody was in favour of the development, even if they did not wish to speak to it, there were no hands raised. When asked if anybody felt indifferent about the proposal, one hand was raised. When asked who objected to the planned crematorium and cemetery, an overwhelming show of hands was given. The parish council took this as an overwhelming democratic mandate to oppose the development.

Westerleigh Group is at http://www.westerleighgroup.co.uk/

Gedling Borough Council’s planning portal is at http://www.gedling.gov.uk/planningbuildingcontrol/ although at present the link to the specific planning application includes a note saying: “Sorry, we are not currently accepting comments from the public on this application”. 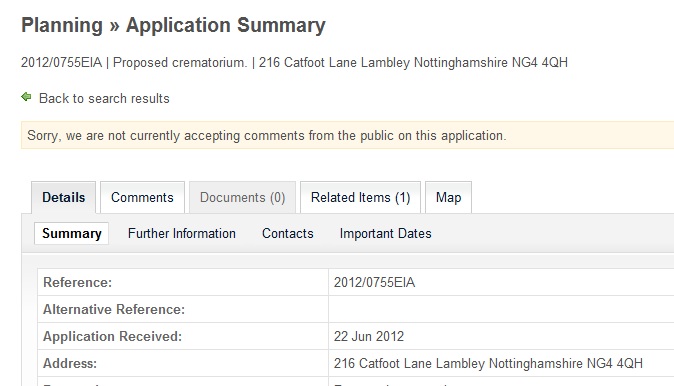