THE ANNUAL Calverton Plough Play has announced the dates and venues of its performances in January 2013. A traditional ‘mummers’ play, whose origins are lost in the mists of time and hangovers, the current Plough Play dates back to 1979 and is performed in pubs across our area. 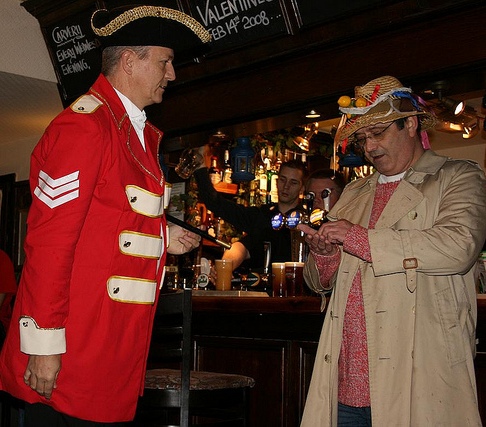 From the archives: Richard Martin plays the Recruiting Sergeant and Nick West the Ribboner in the 2008 Calverton Plough Play

Performances are a variation of an old local tradition, based on scraps of an ancient script, and are given by “the good men and true of the Calverton Real Ale and Plough Play Preservation Society”, (or Crappps). The Crappps website is at http://ploughboys.wordpress.com/

The Plough Play raises funds for the NSPCC, and has donated tens of thousands of pounds to the local branch (so if attending, and we certainly recommend doing so, please be prepared to put your hand in your pocket). Its cultural importance is underscored by being recognised by the National Traditional Drama Research Group as a tradition in its own right

Full details of the Jan 2013 fixtures: