GEDLING Borough Council’s planning committee will decide next week on the proposal to create a new country park on the site of the old Gedling Colliery spoil heap. Planning officers have recommended approval of the plans, which would see 110 hectares of waste land converted into an amenity area for locals and visitors. 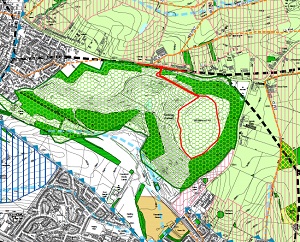 Gelding pit closed down in 1991, and since then the area, bounded by Lambley Lane and Spring Lane on the edge of Lambley, has reverted to scrub land. A parcel of land on the western boundary has recently been developed for housing by Taylor Wimpey as Lime Tree Gardens, which will include 147 homes.

The Gedling planning committee meeting on Wednesday 13 March will decide the future of the project, which if approved will go ahead in two phases – the first to be completed in 2013, and the second in 2014. Plans include a new access road, parking for 40 cars, and surfaced footpaths. The speed limit on Spring Lane is likely to be reduced to 40mph throughout to meet road safety concerns raised by the new park.

Some environmental campaigners are objecting to the plans, saying the park would damage important breeding grounds for skylarks and lapwings. See BBC report here.

Within the new Gedling Country Park is a proposed solar farm, the subject of a separate planning application to be considered at a later date. This farm would see 14 hectares of the site used to locate over 23,000 solar photovoltaic (PV) panels each rated at 240W for a total installed capacity of about 5MW per annum. Developer Re-Fin says this is enough to power 1000 homes. 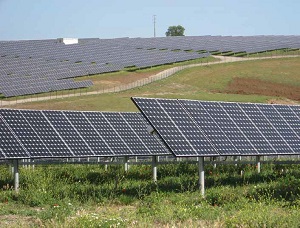 Coming soon to Gedling? A solar farm of the type proposed