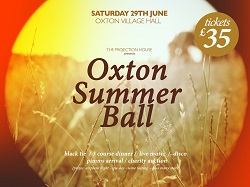 RAISING money for the Notts Air Ambulance and for a new sound system for the Projection House film nights, the Oxton Summer Ball on 29 June 2013 at Oxton Village Hall looks like being a sophisticated evening for the most discerning of locals.

This black tie event includes a welcoming glass of Pimms, a three course meal with cold starter, hot main, and desserts. Dancing until midnight including a Dagoba’s Disco Inferno.

Wine is available to pre-order and draft beer will be available. A charity auction to be held during the evening has prizes including an aircraft flight, wine tasting, and a ‘relax’ day for two at Lakeside.

Tickets are £35, sitting at tables of eight or ten with linen and candelabras. Numbers are limited and the organisers say they anticipate a quick sell-out, and so recommend making applications as soon as possible. Contact Roy Walker on 0115 965 3595

← Defibrillator installed in Lambley
Food Doctors in Lambley May bash →