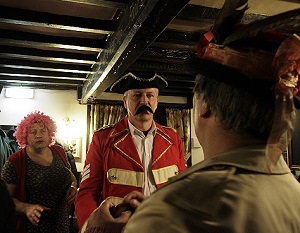 THE good folk and true of the Calverton Real Ale & Plough Play Preservation Society (Crappps) will undertake their annual tour of local village pubs this weekend, performing the unique Plough Play and raising funds for charity.

Plough Plays, or Mummers Plays, are a distinctive folk art of the region. Their true origin is obscure, and the current incarnation has been going since at least the 1970s in pubs around our area.

The 2015 cycle will take place over three nights from Thursday 8 January to Saturday 10 January 2015, with performance of the short and frankly baffling play lasting about 10-15 minutes. The full schedule is given below, and scroll to the bottom for a video of a performance in 2014 at the World’s End in Lowdham.

Performances raise funds for the NSPCC, the chosen charity of Crappps, and over the years some tens of thousands of pounds has been raised. Some pints of beer have also been consumed, we are reliably informed. Find out more at http://ploughboys.wordpress.com/