During April, Woodborough Bridge club’s three teams will be completing their matches for the current season. 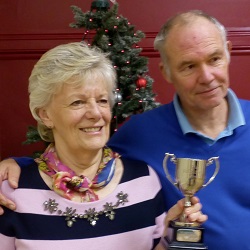 Woodborough couple David and Pauline Tillcock with the Val Malone cup, presented annually to the pair recording the highest increase in average scores

The league is very closely contested this year and the club hopes its teams will be able to maintain their current strong positions.

Woodborough couple David and Pauline Tillcock (pictured) were awarded the Val Malone cup. This is presented annually to the pair that recorded the highest increase in their average scores over the previous year.

Club secretary Jane Hall reports with sadness that long time member and Woodborough resident Hazel Garner has died. She had continued to play bridge until the end of last year.

On 30 March the club holds its usual drive, which will also be a heat for the county Priday Cup. This event is open to all those with an NGS below 9.

The final of the Priday Cup will be held on 30 April in Nottingham. Visitors are welcome to join the club for these events.

Twice monthly seminars and classes are open to non-members on subjects including the ‘losing trick count’, trial bids, cue bidding, and conventions such as Jacoby and Lebensohl.

Please note that from March onwards the club meets 15 minutes earlier, with play commencing promptly at 7pm. Meetings are every Thursday at the village hall on Lingwood Lane.

Details can be found on the web site www.bridgewebs.com/woodborough