TEN DAYS after the official opening of the new visitor centre at Gedling Country Park, landscaping and building work remains unfinished and there is no sign of the promised local heritage displays. 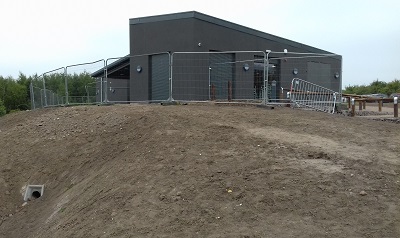 When plans were put forward by Gedling Borough Council in July 2016, the centre was expected to cost £1.2 million and would “incorporate the park’s mining history alongside a modern cafe and outdoor seating area”.

The Cafe 1899 takes its name from the opening date of Gedling Colliery, the site of which is now Gedling Country Park.

The nearby children’s playground also makes reference to the coal mine, with a clever interpretation of pit head gear incorporated into the slide tower.

The design of the visitor centre building is intended to reflect the look of lumps of coal, according to Allan Joyce Architects.

On two visits to the park this week, dumbles.co.uk found some of the visitor centre roller shutters closed even though the cafe was open, much of the outside area was bare earth, and temporary security fencing was still in place around the building. 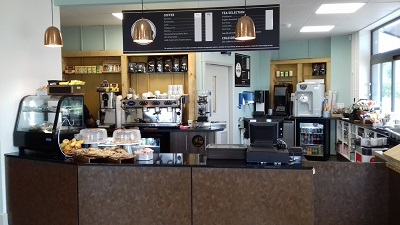 Well equipped Cafe 1899, which has already received a 5-star hygiene rating, but failing to display any prices

No prices were displayed in the cafe or on the ice cream cabinet, despite this being a legal requirement. Cafe staff said this was because the centre had only been open a short time (it is now ten days).

We have asked Gedling Borough Council the following questions:

The official opening was ten days ago, yet the landscaping and building work is not finished. The contractors appear to have moved off site. When will the work be finished?

There is no sign of the heritage or history displays that were part of the original plan. What has happened to these?

When is the additional car park going to be surfaced?

The original plan in July 2016 gave a cost for the visitor centre of £1.2 million, but by the opening 11 months later this was £1.5 million. What has caused this 25% increase?

No meaningful response or even acknowledgement has been received as yet. If and when this happens, our story will be updated. 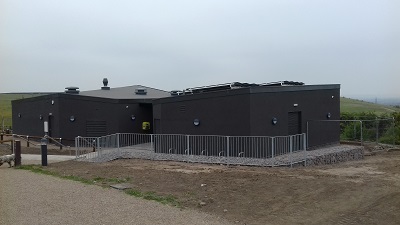 This is what the architect thinks lumps of coal look like. It’s also what £1.5 million of Gedling Borough Council money looks like, and questions remain over the 25% overspend

Gedling Borough Council has sent us the following response to our questions:

The cafe is now officially open and the building work has finished. There may still be some adjustment works required within the building, but the build as such is complete.

The landscaping around the building is not yet complete, the contractors will be completing this over the next few weeks because of current workloads they are not on site every day.

We’re preparing a HLF bid to interpret the heritage and history of the borough, and this will be integral to the country park moving forward in whatever form.

A separate building for this was scoped in the original plans, but it was always a ‘future aspiration’ only as no funding was identified for this element.

The car park is surfaced with Breedon conglomerate gravel as per planning regulations and the extension design specs.

The increase in cost was mainly due to land contamination discovered when putting in the foundations. This led to the increase costs, because of the need for its removal.

Comment: This does not seem an entirely satisfactory response. The visitor centre is late, incomplete, and over budget, apparently because the site was discovered to be contaminated. It’s an ex-industrial spoil heap, so this should not be a surprise.

What the taxpayers of Gedling have, so far, is a £1.5million cafe with no landscaping and which is still partially shuttered, paid for with their money, and with no sign of the contractors returning to finish the job.

However we are happy to report that the cafe now complies with the law regarding the display of prices, so that is some progress at least.