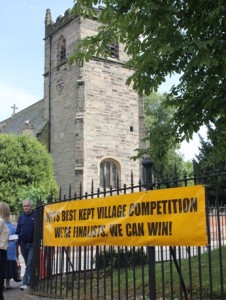 Woodborough and Lowdham have secured places in the final judging for the 2010 Nottinghamshire Best Kept Village competition. Woodborough competes in the medium-sized category for villages of 700-2000 population, while Lowdham is in the larger 2000+ category.

Woodborough has a track record of success in this competition, having been a runner-up in the 2009 competition and a winner in 2008. Lowdham won a certificate of merit in the 2008 competition.

Judging for the latest competition took place in secret in late June, and the shortlisted villages announced at the beginning of July. Competing with Woodborough in the 700-2000 population category are East Bridgford, Beckingham, and Shireoaks.

In the final for the 2000+ category, Lowdham faces Burton Joyce and Radcliffe. In the 300-700 group, Oxton faces Orston, Everton, and Normanton on Soar, while the smaller village finalists are Granby, Morton, Ranby, and Widmerpool.

At its meeting in May 2010, Lambley Parish Council agreed that the village would enter the competition in 2011.