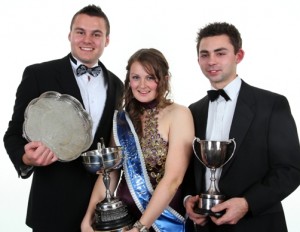 LOWDHAM YOUNG FARMERS have pulled off an impressive triple, claiming all three titles at the Nottinghamshire County Ball 2011.

Chairman of Lowdham YFC Jo Turvey beat off stiff competition from seven other entrants to take the title of Miss Nottinghamshire YFC. The judges praised her hard work within the club, which the 22 year-old has been a member of for eight years, and her commitment county events.

Chris Frost took the title of Mr YFC – the fifth year running that a member from Lowdham has won this award. The 24 year-old has been a member for six years and was commended for his efforts in the organisation of the Newark and Notts County Show. Among his prizes is an expenses-paid trip to visit the B&B Tractor factory at Vaderstad, Sweden, sponsor of the award.

The youngest of Lowdham’s champion young farmers is Jack Tooley, who was named Ambassador of the Year 2011. He has represented his club and county at several competitions and is the current county rally chairman. A pair of tickets to cricket at Trent Bridge are among his prizes.

“We’ve had a fantastic year and it’s great to be rewarded for our efforts” said Andrew Young, Lowdham club leader and Notts County Chairman. “I’m very proud of the club and the members“. In November 2010, dumbles.co.uk reported on some of the club’s other recent triumphs.

Lowdham YFC is one of 11 Young Farmers clubs in Nottinghamshire, and is always ready to welcome new members. Membership enquiries to Lauren Clark, lauren@nottsyfc.co.uk , or telephone 01636 672633.