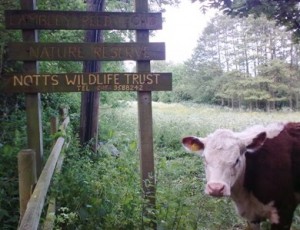 LAMBLEY’S Reed Pond nature reserve is once again home to a number of bullocks, to the chagrin of walkers and dog owners alike. Each year, Nottinghamshire Wildlife Trust deposits a small number of cattle in the field around the reed pond, primarily to act as bovine lawnmowers and keep the meadow areas from becoming overgrown.

However, the use of cattle in an area popular with families and children, as well as dog walkers, is not universally liked. This year the cattle seem to have arrived rather later than usual, being first spotted today (Tuesday 24 May 2011). Perhaps as a result of this late arrival, the bullocks are bigger and more boisterous than the younger animals normally introduced.

Many locals (myself included – Ed) find the presence of cattle rather menacing, and reports of people – especially with dogs – being chased by cattle are not unusual. Nationally, the keeping of cows and bulls in open fields with footpaths and public rights-of-way is controversial, and each year there are reports of people being trampled and killed in these circumstances.

The late arrival of the bullocks and the early spring of 2011 had combined to make the reed pond meadow exceptionally colourful this year, with masses of daisies, buttercups, cow parsley, and other wild flowers putting on an excellent display. No doubt the new arrivals will enjoy eating these, but dog walkers and parents in particular are warned to keep a wary eye open for the bullocks when using the public footpath through the reserve. 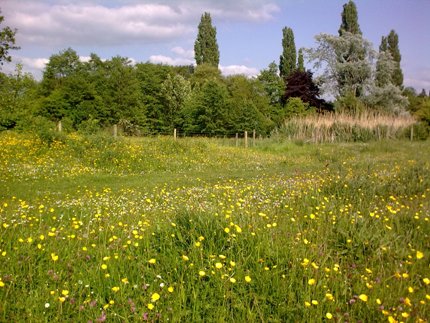 3 comments for “Bullocks back at Reed Pond reserve”