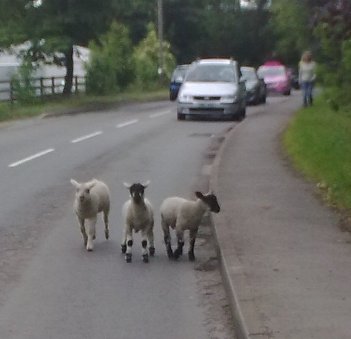 A number of escapes recently have inconvenienced residents

MOTORISTS travelling in to Lowdham on Lambley Road got a surprise this morning when confonted by three stray lambs. The beasts were eventually rounded-up by local residents, but not before evading capture for several minutes and causing a minor traffic jam.

Animals have reportedly escaped in the area, just west of Church Lane, a number of times in recent days. The lambs have, we understand, recently been housed in a nearby barn but seem intent on breaking out of their confines.

One resident criticised motorists who insisted on overtaking cars which had stopped to allow the animals to be recovered safely.

Another commented that the animals were clearly making a bid for the neighbouring village, which is of course Lambley.

Where else would a lamb be going, on Lambley Road?