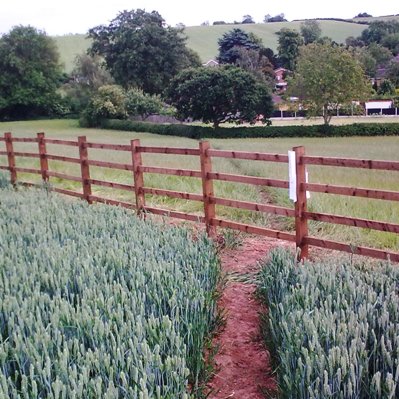 A NEW FENCE erected in Lambley today (Saturday 11 June 2011) has thrown walkers into confusion for crossing and apparently closing-off a well-used footpath. Although only partly completed, the first section of the stout timber fence runs directly across the footpath running south-east from Round Hill towards the Reed Pond nature reserve.

Attached to a fence post on the line of the existing, now closed, path are two sheets showing rights-of-way in the area. The text reads:

REINSTATEMENT OF THE ORIGINAL FOOPTPATH

Sorry for the current inconvenience. The foot path department has asked me to reinstate the original line of the footpath. They were here on Friday 17th June to position a new kissing gate. [presumably Friday 10 June- Ed]

As the crop is still in the field can you please not walk on the crops but join the walked line of the footpath marked on the map.

Please do not climb over the fence.

Thank you very much for your understanding.

Despite the plea to stay off the crop, it is currently impossible to walk from the Mound (Round Hill) to the Reed Pond without trampling on the wheat currently growing in the field.

This southern section of the field has recently been sold by farmer John Hardy, creating a  new line in what was previously a single agricultural field. This field has only supported arable crops, and not livestock, at least in recent memory. The footpath line is lost every year when the crop is harvested and the field ploughed, and is reinstated by foot traffic each season. It runs diagonally across the field from close to the Reed Pond, skirting the Mound, to intercept the upper part of Green Lane. 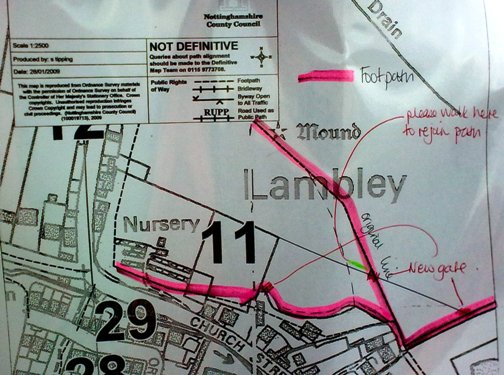 Detail on the notice pinned to the fence: three new gates in all, but the centre one is several metres away from the existing walked line 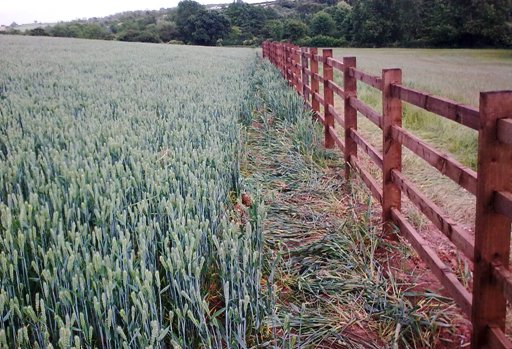 Some crop damage has already occurred, which is inevitable as there is no other way for walkers to reach the gate