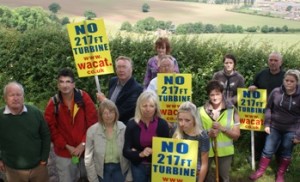 Wacat campaigners demonstrating on Saturday, near the site of the proposed turbine

A PUBLIC meeting in Woodborough last night (21 June 2011) resolved to oppose the application for planning permission for a wind turbine at Woodborough Park Farm. Organised by Wacat, Woodborough and Calverton against Turbines, the meeting attracted about 220 people from the village and surrounding areas.

Presentations were given by Robert Smith, Wacat chairman, Paul Crowther, a committee member, and Geoff Parkinson, Woodborough Parish Councillor. Smith stressed that “very special circumstances” are needed for development in green belt, and said that granting planning permission here would set a precedent for further wind turbines in the green belt.

Paul Crowther spoke about the impact of the wind turbine which, standing 50m above the ridgeline, would be visible from the whole of Calverton and Woodborough. He observed that similar projects yield £3million revenue for the landowner over a 20-year period. A short audio recording of a wind turbine was also played.

Robert Smith then spoke about potential impact on wildlife. The planning application notes that there are Noctule bats in close proximity to the proposed site. A video clip demonstrating the effects of “flicker” was played, followed by a question and answer session where all present were given the opportunity to speak.

Geoff Parkinson then proposed the motion: “This meeting opposes the granting of planning permission of a wind turbine at Woodborough Park Farm in green belt“. In the show of hands, approximetely 200 people supported the motion, 18 opposed it, and three abstained.

A second motion, for Woodborough residents only, requested Woodborough Parish Council to make a donation to the campaign. This was carried with approximately 80% support.

* This report compiled from information supplied by attendees of the meeting *

Concerns include noise, flicker, and impact on wildlife and horses