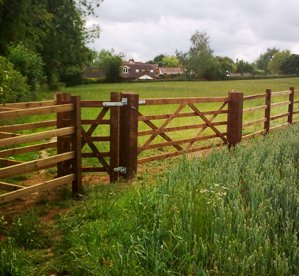 FOLLOWING our report last week on the erection of a new fence crossing an existing footpath in Lambley, the landowner Mrs Katja Watmore has outlined her plans for the newly-divided field. The land, purchased from local farmer John Hardy a few months ago, amounts to about a hectare (2.5 acres) in the southern part of the field, adjacent to the Reed Pond nature reserve and including sections of footpaths running east, west, and north from the reserve.

Mrs Watmore’s plans include the creation of a new orchard, sheep grazing, and the promotion of wildlife. A few trial trees have already been planted, to establish which are likely to succeed, although apples pears and damsons are the main candidates. Lambley has a long tradition of fruit growing, although many historic orchards have been felled for housing or fallen into disuse.

The sturdiness of the fence is accounted for by the need to restrain livestock – sheep will be kept to graze the land and help maintain a new wildflower meadow. This is not expected to happen immediately, but in a year or two, and this may of course have implications for dog walkers using the paths. Horses are also expected to graze the land, rather sooner than this.

On the matter of the footpath lines, Mrs Watmore wishes to emphasise that she had no choice on the position of the gates, as this was instructed by the footpaths department to reinstate the official footpath route. This original path line had shifted to the unofficial ‘walked line’ after the field had been ploughed. Kissing gates have been installed rather than stiles, to enable easier access forwalkers, and we are told that there are currently no plans to fence-in the footpaths.

A field newly divided: wildflower meadow will be grazed by sheep and horses

2 comments for “New orchard for Lambley”