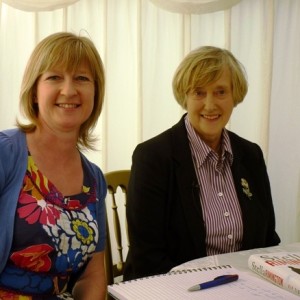 FORMER MI5 boss turned novellist Stella Rimington spoke about her books, her former career as a spymaster, and her local connections to a packed house at the Lowdham Book Festival this week. The sell-out crowd at Caythorpe Cricket Club on Tuesday 21 June 2011 heard Rimington, a former student at Nottingham High School for Girls, discuss the similarities and differences between the fictional world of espionage depicted in her novels and the real world intrigues in which she played a central role.

Rimington stepped in as a late replacement for John Simpson, the veteran BBC journalist, who was called away to report from a war zone overseas. Festival organiser Jane Streeter joked that Lowdham Book Festival obviously proved just a little to frightening for Simpson, but that there was clearly nothing that could frighten Rimington.

With over 400 people packed into the marquee at Caythorpe, Rimington explained that she had enjoyed five different careers – as a historical archivist, a diplomat’s wife, an MI5 officer, a company director, and as a writer. Her career in books began with the publication of her autobiography, Open Secret, in 2001. Turning to novels, she was determined to counteract the male-dominated and unrealistic volumes that have traditionally populated the spy-thriller bookshelves, and so introduced the world to her heroine, Liz Carlyle.

Face with the inevitable question about whether Liz Carlyle is really Stella Rimington, her response is frank. “Liz is not me, but she does have some elements of me in her. I allow her to say some of the things that I felt like saying at the time, and like me she doesn’t like being patronised, but really we are completely different”.

What is perhaps more relevant is that, through Carlyle, Rimington has continued the campaign of gender equality which saw her rise through the ranks to become the first female director-general of MI5. She spoke of the time in the 1970s when she was a junior MI5 officer and, like other women, was considered a second-class operative by the male hierarchy. “This was at the time of the first sex discrimination legislation, and I led a deputation to have those laws applied within the service.”

30 years later, it is clear that she felt much the same way about spy fiction. “From Duckworth Drew to Carruthers of the FO to James Bond, spies were always men and always behaved in a very macho way, and it was about time we saw some women in the intelligence services”. A well as introducing strong female characters, Rimington wanted to reflect the modern world of espionage, facing contemporary issues and problems.

Liz Carlyle has now appeared in six novels, the latest being Rip Tide (officially published on 18 July, but advance copies were on sale on the evening of Rimington’s talk). In this, a young British muslim is captured while taking part in a pirate raid off the Somali coast, leading the security services on an epic endeavour to piece together a broken jigsaw before it’s too late.

In a lively question and answer session after her 45-minute talk, Stella Rimington spoke abut the pressures on her family life and the most dangerous day she ever faced – when the newspapers published her name, requiring an emergency evacuation of the family home and causing much surprise among friends who until then had known only that she worked for the government.

Liz Carlyle will return in Stella Rimington’s seventh novel out in 2012, and meanwhile the Lowdham Book Festival 2012 enters its busiest days this weekend. All events tomorrow, Saturday 25 June 2011, are free to attend and include appearances from Jasper Fforde and Sagheer Afzal among many other literary events, plus the children’s tent which will include the first-ever performances of Cowboy Baby, a new play from Lambley-based Catfoot Theatre, based on the popular Sue Heap book. 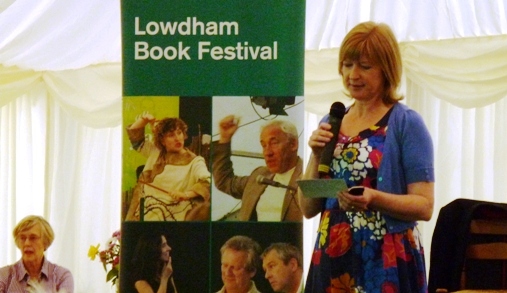 "John Simpson was too scared, but not Stella Rimington"

← New orchard for Lambley
Scenes from the book festival →