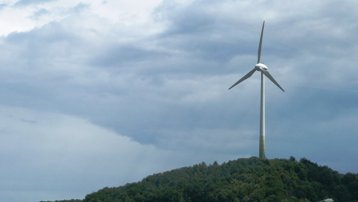 A wind turbine in Germany, similar to that proposed for Woodborough (pic: Vytautas Palubeckas / Fotopedia)

A CONTROVERSIAL plan to erect a 67m wind turbine near Woodborough has passed a planning hurdle, with the approval of the proposal this evening by Woodborough Parish Council. After empassioned statements from both councillors and members of the public, the councillors voted 4:3 in favour of the development, with one two abstentions.

The meeting, at Woodborough Village Hall, attracted over 40 members of the public. Parish council chairman Richard Whincup opened the meeting at 7pm, and immediately adjourned it so members of the public could make statements – these not being allowed in council meetings. Eight did so, divided evenly between those for and against the proposal.

Among the objections raised to the turbine were its visual impact in an area of designated Green Belt, doubts over whether onshore wind turbines like this are an effective source of ‘green’ power, noise, and the distracting effect of the turbine on drivers.

Those speaking in favour cited the need for low-carbon sources of energy and claimed that protestors were wrong about noise levels and were indulging in nimbyism (not-in-my-backyard).

The applicant, John Charles-Jones of Woodborough Park Farm, addressed the meeting to explain what he saw as the benefits of the development. He said the turbine was “the most important project of my career, personally and professionally”, and confirmed that the permission being sought was to replace a previously-granted planning approval for two smaller 18m turbines on the site. The larger turbine would generate 865,000kW [correction: 330kW] of power, equivalent to 28% of the consumption of the village of Woodborough, he said.

In an unusual twist to proceedings, as Cllr Whincup attempted to reconvene the parish council meeting he was interupted by a police officer who had been in attendance. The officer reported that complaints had been received about signs put up around the village, reminded those present that fly-posting was illegal, and instructed that they must come down “tonight”. He also singled out  a Land Rover carrying anti-wind turbine signs and said that this must be moved from its position near the Nag’s Head.

Having finally restarted the meeting, the parish council ran through its normal agenda. A small number of planning issues were resolved before the wind turbine was discussed, at which point the applicant John Charles-Jones, who is a member of the parish council, declared his interest and left the hall. Councillors with a view on the issue repeated some of the issues raised by the public, although the chairman reminded the body that the council was not obliged to take public opinion into account.

In the vote, four voted in favour of the development, three against, and one two abstained. The next stage of the process is for the planning application to go forward to Gedling Borough Council.