NOTTINGHAMSHIRE’s Best Kept Village (BKV) competition now includes two of the three main villages in our circulation area. A brief notice put up on the village noticeboard in Lowdham last week confirms that the village has entered the competition. 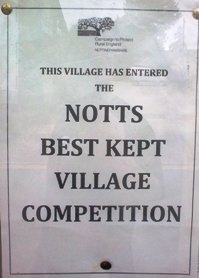 Entry announced by this brief notice

Organised by the Nottinghamshire branch of the Campaign to Protect Rural England (CPRE), the Best Kept Village Award is divided into four categories according to the size of the village. Lowdham falls into CPRE’s category A, for villages of over 2000 population. In last year’s competition, Lowdham made it through to the final four, but no further. The winner of this category was Collingham, and the runner-up Radcliffe on Trent.

Neighbouring Woodborough has done rather better in the competition recently, winning category B in 2010 and having already announced its entry to the 2011 competition. Category B includes villages with between 700 and 2000 population.

Editor’s note: this is all the information we have on this matter. Lowdham Parish Council has so far made no mention of the entry on its web page, and the last council minutes published there (in draft) are from its 6 January 2011 meeting. We’ll be happy to publish further details as and when we discover them.

← Sounds of the sixties in Woodborough
Windfarm wars hit Woodborough →