THE D3 bus service, which travels from Nottingham to Newark via Lambley, Woodborough, Calverton, and Oxton, is to be axed next week. Centrebus, which took over operation of the route just last month, has confirmed that next Wednesday’s bus will be the last. 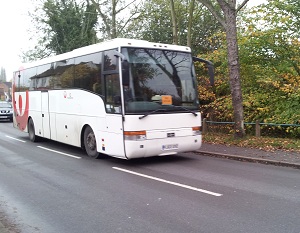 This week's D3 bus en route through Lambley. Next week's service will be the last.

The D3 was operated by Veolia Transport England until 3 October 2011, when it and several other routes were taken over by Centrebus. The company’s commercial director Dave Shelley told dumbles.co.uk: “This route, which receives no local authority subsidy and does not generate sufficient revenue to cover its direct operating costs, has been identified for withdrawal.”

The service operates only once each week, on Wednesday. It departs the Broadmarsh Centre at 09.35, passing through Lambley at 10.10, Woodborough at 10.20, and arriving in Newark at 11.25, according to the timetable. The return journey leaves Newark at 14.15 and arrives back in Nottingham at 16.05.

Although Centrebus confirmed that the D3 would “not operate after 20 November”, the once-weekly schedule means that the last service on the route will in fact be next Wednesday, 16 November 2011.