THE CONTROVERSIAL proposal to erect a 66.5m wind turbine at Woodborough Park Farm is set to go ahead after Gedling Borough Council’s planning committee approved the plan this evening. The committee voted 11 in favour of the application, seven against, with one abstention.

The council chamber at Arnot Hill Park was packed with members of the public, with by our count about 120 in attendance. These appeared overwhelmingly opposed to the plan, judging by the applause (or lack of it) given to those speaking either against or for the application. 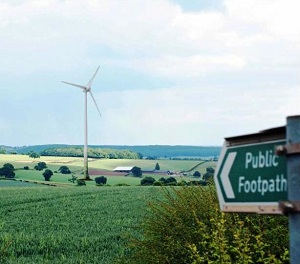 Montage by the opposition group Wacat

In making their decision, borough councillors chose to follow the advice given by the head of planning and environment for Gedling, Peter Baguley. Summarising the arguments on both sides of the debate, he acknowledged that the project was “established as inappropriate development in the Green Belt, by virtue of introducing an industrial feature. However… the proposal is considered to not result in any material impact on the nearby residential amenity, local wildlife or openness of the Green Belt.”

“I consider that… the applicant has been able to demonstrate that the positives of the proposal significantly outweigh the harm to the Green Belt [and] that very special circumstances, both economic and environmental, apply to this proposal”. He recommended that the planning committee grant conditional planning consent, subject to a number of conditions.

During the consultation phase, numerous bodies had expressed their views on the proposal. Calverton Parish Council objected on the grounds of visual impact and proximity to the bridle path. Epperstone Parish Council also objected. Woodborough Parish Council and Newark and Sherwood District raised no objection.

Others offering objections included the urban design and conservation consultant, who felt it would be an intrusion into the rural setting around conservation areas, and the Rights of Way Officer who, with the British Horse Society, felt it was too close to the bridle way.

In terms of written submissions, a total of 1225 letters and representations were received. 100 were in favour of the turbine, while 1125 were opposed.

One area of contention over the application concerned the ecological surveys carried out as part of the planning process. These were conducted by the UK Farming and Advisory Wildlife Group, Fwag, but the impartiality of the surveys was called into question when it emerged that the applicant, John Charles-Jones, was the local Fwag chairman.

Citing the reasons for the decision, Gedling Borough Council says it is its opinion “that in this instance the proposed development has successfully demonstrated very special circumstances which significantly outweigh the harm to the Green Belt and the visual impact on the landscape.”

5 comments for “Turbine goes ahead after planning approval”