AHEAD of tomorrow’s (Thursday 26 April) public exhibition at Mellish RFC, cemetery developer Westerleigh has given dumbles.co.uk an exclusive preview of the case it will make to support plans for a new crematorium at Catfoot Lane, Lambley. 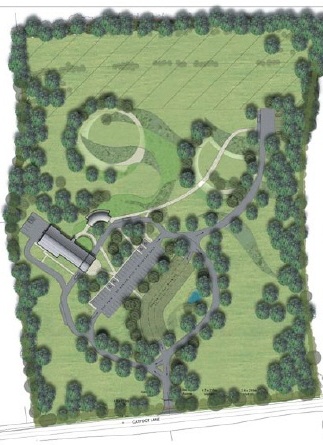 In a four-page leaflet to be distributed at the exhibition, the company says that Nottinghamshire is one of the poorest served counties in England for crematoria, with the greater Nottingham area currently served by just two facilities. These are at Wilford Hill on the southern edge of the city, and at Bramcote in the west.

“A new crematorium would greatly relieve pressure on both these facilities and finally provide a local, accessible choice for people in Gedling” its says.

Addressing the issue of traffic, the company points out that 95% of funerals take place in the middle of the day, outside peak travel times. It says that crematoria do not normally have a significant impact on road congestion.

In its first year, the new crematorium would be expected to hold about 750 funerals, or about three each day. On average, it says, 18 cars attend a typical funeral. Even when activity grows to a maximum of 1165 funerals per year, this would only mean around 90 visiting cars per day. The company acknowledges that on the busiest days this may rise to 125 cars, but says this will be “exceptional”.

The proposed crematorium would have only a single chapel.

On the environmental impact of the plans, the company claims that this would “probably be the cleanest facility in the world when built, as it is using the very latest environmental technology”. It says that the sophisticated filtration equipment used “removes all smoke and odour and eliminates virtually all emissions”.

Plans reveal that the main building would be a low-rise structure at the northwest of the site, and the company says this would be tucked into the slope to minimise visual impact. The majority of the site will remain green, hosting memorial gardens and landscaped grounds.

Further news on this plan, which seems certain to attract significant local opposition, as it becomes available. To stay abreast of the news in Lambley, Lowdham, and Woodborough, subscribe to our free weekly email newsletter, follow our Twitter feed, or join our Facebook page.

Elevations of the proposed building, taken from the leaflet to be distributed at the public meeting at Mellish RFC on Thursday 26 April, 3pm-8pm