LAMBLEY’s Cowslip Sunday celebrations on 6 May 2012 were widely regarded as a huge success, boosted by a welcome improvement in the weather. 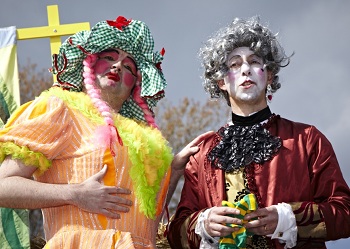 Local photographer Mel Smith has kindly shared many excellent high-quality photos of the Cowslip Procession and the play Lambley Jack and the Golden Stockings with us.

In the play, we were introduced to the extended family of local hero Lambley Jack, including his mother Lambley Lil, sisters Jill and Jess, and brothers Jud and Jim, plus his companion cow Flamstead. The family of stockingers agree to provide local dandy Sir Frederick Fopsqueak with golden stockings, and end up in terrible trouble after striking a deal with the wicked elf Tom Tit Tot. 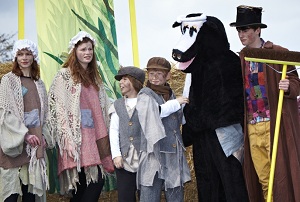 A review of the day can be found on this blog, and we would welcome links to any further coverage.

With so many good pictures to choose from, we have added a selection of our favourites to our Flickr account (Flickr is a bit like YouTube, but for pictures rather than videos). You can view all 69 photos of Cowslip Sunday on this link.

Along with the procession and play, Cowslip Sunday saw a successful arts and craft fair held at Lambley Village Hall, an innovative art installation called Poetry Seen in the dumbles, plus free face-painting and Punch & Judy shows, all rounded off with the Cowslip Ceilidh in the evening.

The evening before also saw a successful Cowslip Concert held at Lambley Church, with many local youngsters demonstrating their talents.

Organisers estimated the audience for the Lambley Jack play at about 500 people, much higher than previous years, and noted that the relocation of the stage from the playing field to the car park – a response to the recent wet weather – had worked well.