WE MAY not be getting a direct visit from the Olympic flame in our area (although Woodborough resident David Burgess will carry the torch next week at Balderton), but we can enter into the spirit of the games at an entertaining evening of storytelling on an Olympic theme. 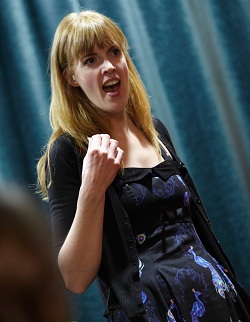 Emma Carlton played Elizabeth I at Cowslip Sunday, and is one of the storytellers at the Night of Olympic Storytelling (pic: Alan Fletcher)

As part of Lowdham Book Festival, and coinciding with the arrival of the flame at the nearby village of Nottingham, the Theatre Royal’s own storytelling troupe The Royal Company Storytellers will be regaling the audience at St Mary’s Church, Lowdham, with epic tales and ripping yarns on a sporting theme.

The strong local connections to the company makes this performance particularly interesting for us. Three of its members – Maggie Burrows, Emma Carlton, and Lynne Doshi – are in the cast of the Lambley Jack plays and were last seen locally on stage on Cowslip Sunday, just a few weeks ago. The evening is hosted and organised by David Longford, director of the Lambley Arts Festival.