A GENUINE Olympic torch will be used to signal the start of this year’s Feast Sports in Woodborough. 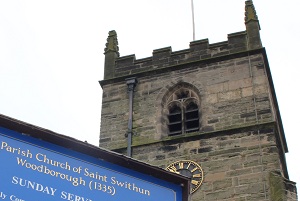 Feast Sports is a traditional village event that has been held for over 180 years, originally as part of the feast of St Swithun. This year it is to be held on 7 July on the school field, and takes on an Olympic theme.

This is a free admission family event, starting with the ringing of the St Swithun church bells at 2.30pm and then officially to be declared open by Woodborough’s own Olympic torch bearer David Burgess, who will bring his torch along for all to see.

The fun-packed afternoon includes races for all ages, and a community tea for 4 to 12 year olds. In keeping with the theme, a special Olympic gift for the children has been commissioned by the organisers.

A variety of traditional races will include the traditional cross country, and the village tug of war. At the finish, around 4.45pm, all visitors will be invited to walk, jog, or run around the cricket field before presentation of the special 2012 Feast Sports commemorative medal.

Entertainment will include a children’s lucky dip, skittles, and a raffle. Tea, coffee, ice creams, soft drinks, beer, and wine will be available throughout the afternoon.