CHILDREN from Woods Foundation School in Woodborough can be seen on a short video posted on Facebook, taking part in a national competition to find the best carrot whistlers in the country. 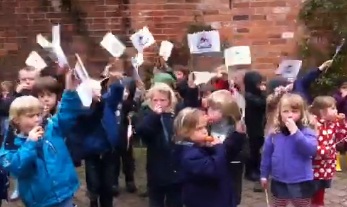 Scene from the video. We strongly suggest turning the volume down before viewing the video, available on the British Carrot Growers' Facebook page

Organised by the British Carrot Growers’ Association, the competition – the Carrot Whistle Olympics – seeks the finest rendition of a song on the theme of ‘gold’ played on a whistle made from a carrot. As daft and lighthearted as it is, the prize is a very handsome pair of gold coins valued at £1200.

Entries are made by submitting a video to the association’s Facebook page, and the judges say they will take into account the number of ‘likes’ an entry attracts when making their decision. Those interested in taking part can watch a how-to video, also on the page, or send a stamped addressed envelope to the association for a free carrot whistle (again, details on Facebook).

Vegetable musical instruments seem very much in vogue, and we’ve just learned that the Xylophone Theatre Company will be bringing their excellent interactive play Can You Dig It? to Lambley Village Hall in March 2013, as part of the Lambley Arts Festival’s ongoing activities. We’ll preview this nearer the time, along with Farmer Scrooge’s Christmas Carol which visits Lambley in December 2012, but in the meantime the Can You Dig It website offers much for the lover of vegetable-based music.