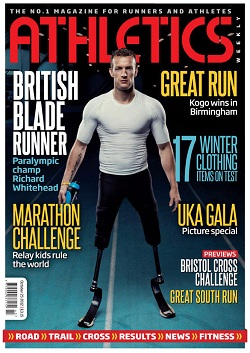 LOWDHAM athlete Richard Whitehead is featured on the front cover of this week’s edition of Athletics Weekly, the popular magazine for runners and athletes.

Whitehead is a world class paralympic athlete with several national and international records to his credit, who won gold in the 200m T42 race at London 2012. His success meant a gold-painted pillar box in Lowdham Main Street, and the issue of a special postage stamp (see our coverage here)

This latest accolade includes an in-depth interview in the magazine, commonly referred to as AW, under the title British Blade Runner – interview with Paralympic champion Richard Whitehead.

The magazine can be found at larger news outlets (look for the October 25 2012 issue, price £3.15) or subscriptions can be bought online via http://www.athleticsweekly.com/

← A celebration of the apple
A handmade Christmas in Lowdham →