The first event on 17 April 2013 found 68 players (23 from Woodborough) rotating between five cafe venues in the centre of Nottingham. After gathering at Canal House for registration, players moved between Jamie’s Italian, The Living Room, Couture at Nottingham Contemporary, and Fellows Morton & Clayton. Lunch was taken wherever they happened to be at lunchtime

The event finished at The Living Room for a post-play drink, results, and prizes, all generously donated by the venues. £882 was raised for the Beamond House Hospice in Newark.

It is believed this type of event was first tried in Antwerp, spread to London, and now for the first time in Nottingham. 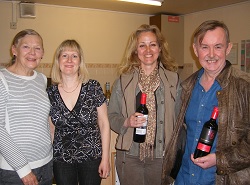 The second event was held on 22 April at the Park Tennis Club. 40 players enjoyed a light lunch followed by duplicate bridge, and £350 was raised for the Teenage Cancer Trust. Liz Didcock, a consultant paediatrician at the University Hospitals Trust, spoke about the Teenage Cancer Trust and about her fundraising walk along the Great Wall of China.

The wining pairs were: Toni Smith and Steve Fordham, and June Marron and Lynn Chawner. The event was organised by Jane Hall (Woodborough BC) and Janet Jacques (Wollaton BC).