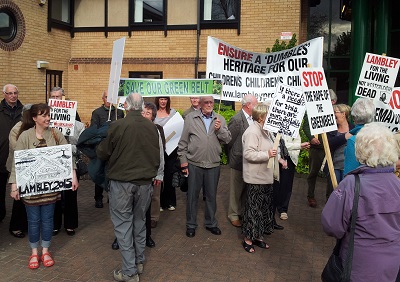 About 200 residents turned up to oppose the plans

In reaching these decisions, the committee followed the recommendations made by council’s planning officer.

The final vote, after two hours of at times heated debate, in a chamber packed with local residents and suffering from inadequate ventilation, was close. Nine members voted to accept the officer’s recommendation, with eight against and one abstention.

The second vote regarding the Lymn application was almost unanimous, with (if we counted correctly) 17 supporting the recommendation to deny planning permission and one abstention.

About 200 local residents turned up to protest against the proposals, which they said would be an unwarranted intrusion on the green belt. Many brought banners and placards, which were used in an impromptu picket outside the Arnot Hill Civic Centre. They were not allowed to bring these inside the chamber.

Proceedings began with an unexpected legal intervention on behalf of AW Lymn. The company had issued a barrister’s letter earlier in the day complaining that its application had not been treated fairly in the officer’s report and demanding that both applications be denied planning permission until various issues could be resolved.

Planning committee chairman Peter Barnes acknowledged that some aspects of the report were “not as clear as we would have wished” but said they were adequate to make a comparative appraisal. Gedling’s legal advisor said it would not be appropriate to dismiss both applications, and the debate began.

Much of the meeting revolved around whether there was a need for a crematorium in the area. Several earlier applications to build such a facility in Gedling have fallen because a development in green belt can only be approved if ‘exceptional need’ can be demonstrated, and these failed to do that.

The need is assessed in both quantitative and qualitative terms, said planning officer Peter Baguley. “There is no overall deficiency in quantitative terms” to justify allowing this intrusion into the green belt, he told the assembly. “There is though some evidence of sustainability benefits”.

This matter appears to centre on travel time to existing crematoria in the county.

Baguley acknowledged that the issue was “finely balanced” but said that in his opinion these were the “very special circumstance” necessary to grant planning permission.

Addressing the committee to oppose the plans were Woodborough resident David Thorpe and Lambley resident Dawn Edwards. Both delivered arguments that they hoped would persuade the committee that there was no pressing need for a new crematorium. 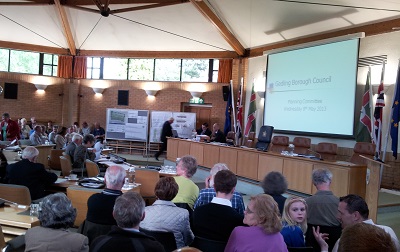 Heated debate in an overheated chamber, and a narrow victory for developer

Richard Evans, managing director of Westerleigh, contradicted this by stating that “Our application is different from those that went before because we have demonstrated an exceptional need.” He continued by comparing his company’s plans to the rival Lymn development which, he said, failed on numerous points.

Nigel Lymn Rose of AW Lymn then spoke of his dismay when Westerleigh “out of the blue” chose to apply for planning permission on a site “right next to” where his company had long planned a crematorium. “So far I have not commented on Westerleigh, but they have chosen to comment on us. Their proposal would have more impact than ours because it is a virgin field.”

Planning committee members then made their own comments. Among those speaking against any development, Chris Barnfather dismissed the travel time argument (the so-called qualitative need) saying that he regularly travelled between Ravenshead and West Bridgford at peak times and his experience demonstrated that the 30-minute travel time to a crematorium would be achievable already.

“I think what we have here is an application that would be ‘nice to have’, but is not a ‘need to have’. We’re talking about the dumbles here, about an area as close to outstanding natural beauty as we have in Gedling.”

In this early debate, three councillors spoke against the proposals and one in favour. Further representations from opponents of the plans, and the two rival developers, followed. Arguments again centred on whether any need existed either for more crematorium capacity or lower travel times. Committee chairman Peter Barnes then commented that he felt the Westerleigh proposal was preferable, and that he thought there was a need for a new crematorium.

In the final vote, the committee agreed with him and approved the planning officer’s recommendations to grant permission to Westerleigh and deny it to Lymn.