THE BID by opponents of crematorium development on Catfoot Lane Lambley to have the planning approval overturned due to apparent procedural irregularities has failed. Opposition group CCOG had appealed to the National Planning Control Unit (NCPU) to intervene and prevent Gedling Borough Council from ratifying the controversial decision. 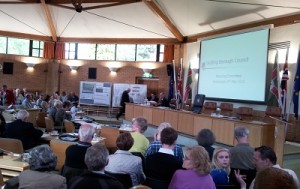 The decision by NCPU allows Gedling to proceed with ratification. CCOG is now hoping that members of the public will appeal directly to the council to overturn the decision, made at the planning committee meeting on 8 May 2013.

CCOG says: “The letter from the NPCU states that they encourage issues to be resolved at the local level (ie, Gedling Borough Council). We would therefore urge anyone who believes the decision is wrong, or has concerns about the process by which the decision was reached, writes to John Robinson, chief executive at Gedling Borough Council : john.robinson@gedling.gov.uk and raise a formal complaint on the following link : https://apps.gedling.gov.uk/(S(qzu5x445c4iavg55jnphjh31))/forms/default.aspx?formid=16

CCOG wants people to write with their own concerns, but says some points to consider might be: