Last month’s decision by Gedling Borough Council to grant planning permission for a crematorium on Catfoot Lane, Lambley, was made entirely on political party lines, it has emerged. 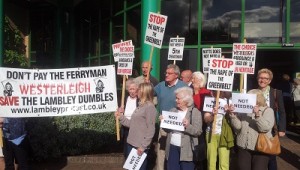 Protesters turned out in force to oppose the crematorium

Minutes of the planning meeting now published on the Gedling Borough website record the votes of the 16 councillors present. By cross-referencing against their political affiliations, it is clear that all ten Labour councillors on the committee voted in favour, and all six Conservatives voted against (full list below).

The decision on 3 June 2015 has dismayed campaigners against the development, which is on green belt land. dumbles.co.uk reported live from the meeting using Facebook and Twitter to share observations of what was a boisterous and at times acrimonious meeting. Planning committee chair John Truscott appeared to lose his temper at one point, banging his gavel angrily on the desk in an attempt to silence dissenting voices. His actions were criticised in the chamber by other councillors who wished the opponents to be heard. 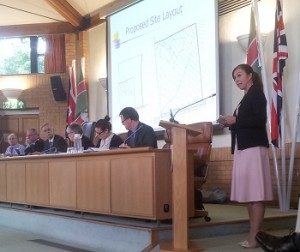 No campaign was spearheaded by Dawn Edwards, here addressing the committee

The one remaining glimmer of hope for the ant-crematorium campaign lies with the Department for Communities and Local Government, which may elect to ‘call in’ the decision if the secretary of state, Greg Clark MP (Con, Tunbridge Wells), feels the project is too complex, important or wide-reaching to be decided at local government level.

The opposition group told dumbles.co.uk: “We will of course be trying to persuade the department to call this in and make an independent decision, but it’s too early to tell – they could just take a surface look at this and decide that the local decision should stand”.

How the votes were cast: