WOODBOROUGH’s Four Bells has been named the county’s best pub for dining in the first annual Nottingham Food and Drink Awards. 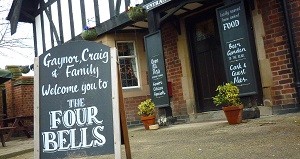 Landlord Craig Smith collected the trophy on 25 June, during an awards evening at the East Midlands Conference Centre. The prize was handed over by TV Masterchef presenter Gregg Wallace.

The awards scheme is organised by the Nottingham Post and supported by Fraser Brown solicitors to recognise the best food and drink venues in the area. Top prize went to Langar Hall, with La Rock in Sandiacre claiming both best restaurant and best service. 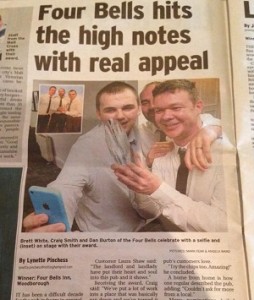 How the Nottingham Post reported the Four Bells’s triumph

The award of best dining pub in Nottinghamshire for the Four Bells comes almost five years after Craig and Gaynor Smith took over the pub in October 2010, and set about creating interesting menus using the best quality ingredients. The Post reported that the Smiths “were described as outstanding landlords who were genuinely welcoming”.