The legality of the decision to grant planning permission for a controversial crematorium development on Catfoot Lane has not yet been decided, but that has not prevented the developer Westerleigh group beginning work on the site. 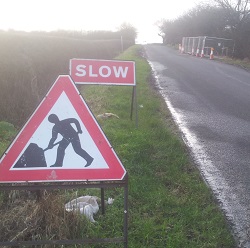 Catfoot Lane just got even narrower

We learned this week that a digger had been spotted removing part of the hedge, and when dumbles.co.uk visited today we found that significant work had already taken place.

Behind wire mesh hoardings, the roadside ditch has been filled with hardcore to allow construction vehicles onto the site. A hardstanding area has been laid and a number of temporary stores and offices have been positioned. Several surveyor’s posts have been driven into the ground.

The restriction on the already-narrow Catfoot Lane has already led to a number of vehicles driving onto the soft shoulder, as evidenced by muddy tyre tracks opposite the site entrance.

The judicial review into Gedling Borough Council’s decision to grant permission to the project is scheduled for next week in Birmingham. In parallel, Westerleigh has recently submitted a further planning application for the site – prompting opponents of the development to organise yet another round of local letter-writing to protest against the scheme. This new application will not consider objections raised against previous applications.

Site preparation began this week despite judicial review next week