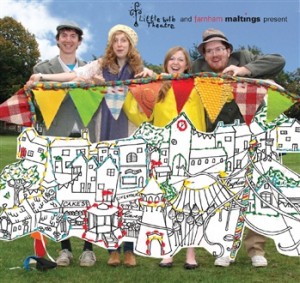 FOR VILLAGES across the country, the annual village fete is one of the most important dates in the calendar. For the inhabitants of Little Upper Downing, it is much more than that. From the tittle-tattle of the tearoom to the exchange of accusations on the allotments, the village and its eccentric residents find that the day of the fete could become… a fete worse than death. Can the community pull together to prevent the whole thing getting completely out of control?

Little Bulb Theatre visits Lambley Village Hall on Saturday 5 March 2011, bringing its acclaimed production The Marvellous & Unlikely Fete of Little Upper Downing. This award-winning touring theatre company, which won the Edinburgh Fringe First award in 2008, portrays life in the village through live music, puppetry, and vibrant visuals. Its small cast creates a vast panoply of memorable characters from every walk of village life, brought together in a performance that promises to be unforgettable.

This production is the latest in Lambley’s growing programme of theatrical presentations, which has included The Last Snow Rider and Michael Morpurgo’s Farm Boy. It is brought to the village under the auspices of the Lambley Arts Festival, through Nottinghamshire’s Village Ventures initiative.

Tickets are priced at £7.50 per person, £6 concessions, and a family ticket is available for £23. Contact David Longford on 07914 942019 for reservations. Seating accommodation in Lambley Village Hall is limited, and the last production held there was a sell-out, so early booking is recommended. The performance begins at 7.30pm on Saturday 5 March 2011.