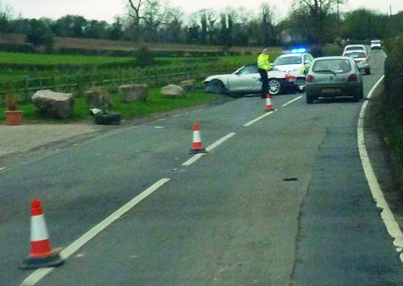 A car smash this afternoon (4 April 2011) on Park Lane, Lambley, has highlighted the safety hazard presented by a set of boulders installed on the road side. Residents have voiced disquiet over the boulders – up to a metre in diameter – which were placed on the verge outside the entrance to Lambley Grange last year.

Today’s accident has shown just how unforgiving these rocks are. A Porsche Boxster appears to have hit the boulders at significant speed, leading to extensive damage to the vehicle. Sirens were heard in Lambley at about 16.25, and shortly afterwards a sole individual was seen talking to police at the scene of the accident. It is not known whether anybody suffered injury as a result of the crash police helicopter was seen circling the area. It is now understood that the driver ran off after the accident, leading to speculation that he may not have been in a fit condition to drive (update 15 April)

The roadside boulders are understood to have been installed by the owner of Lambley Grange to deter parking near the gated entrance to the house. Disquiet about them has been raised in Lambley Parish Council meetings and the rocks have been the subject of discussion in the village. One local wag has dubbed them ‘Lambhenge’. Today’s events seem likely to lead to renewed calls for their removal.

Do you have any further information on this incident? Email the editor – editor@dumbles.co.uk – or leave a reply below 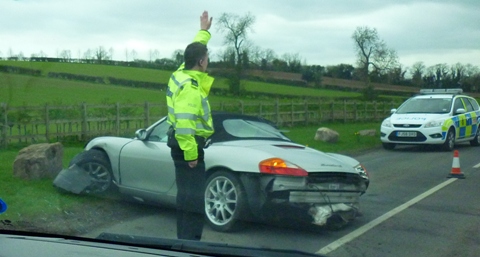