PROPOSALS to allocate new areas of Lowdham for housing have attracted protests from residents. A one-day exhibition at the Lowdham WI Hall yesterday, 27 October 2011, presented Newark and Sherwood District Council’s ‘core strategy’ for development of housing and employment sites in a number of locations across the district, including Lowdham. 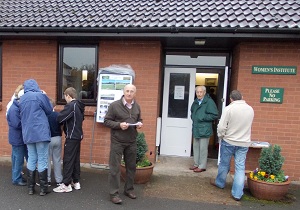 Anti-development presentation outside the WI Hall in Lowdham yesterday

Outside the hall, a small group gathered to make clear their opposition to development on the Green Belt. On a display board at the entrance, their objections were spelled out: the proposals would contribute to congestion and the flooding risk in the village, ‘break’ the Green Belt, and increase pressure on local services including the GP surgery, while contributing nothing to employment, school places, or making housing affordable for local people.

Newark and Sherwood adopted its ‘core strategy development plan document’ (DPD) in March 2o11, to set out its “higher level strategic policies and proposals” for development over the next 15 years. The core strategy calls for 0.5% of the district’s planned housing growth to be in Lowdham, amounting to 71 new houses in the village. Existing ‘preferred sites’ can provide less than half of that total.

Documents handed out by the district council inside the WI Hall outline the development of the DPD and the identification of sites for development. In Lowdham, two existing development areas are shown on maps made available to take away. One, known by the planning department description Lo/Ho/1, is at the north of the village with access opposite The Leys and would provide 20 new houses. The other, called Lo/MU/1, is at the eastern edge of Lowdham, south of Southwell Road and between the tennis courts and the John Harrison garage. This is the site of a proposed mixed use development including 15 houses.

Documentation can be viewed here on the the Newark and Sherwood website, and a map is online here – but despite promises of interactivity, the areas shown on the online map do not appear to be the same as those shown on the paper maps handed out yesterday. See below for an image of that map.

The consultation period for the district council’s plans ends on 14 November 2011. 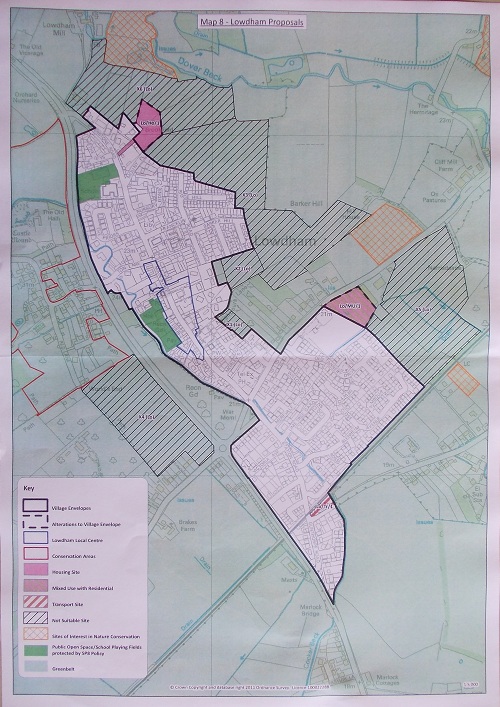 Areas earmarked for development are in pink