AN EVENING of comedy and song about the joy of vegetables and growing your own is promised when the touring theatre show Can You Dig It? plants itself in Lambley on Saturday 9 March 2013. 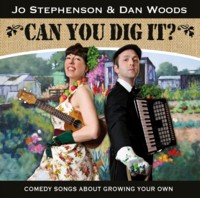 This quirky allotment-based comedy and music show stars two of the UK’s finest musical comedians (and real-life allotmenteers) Jo Stephenson and Dan Woods, in a show that premiered at the Edinburgh Fringe in 2011 and has won widespread acclaim since.

Appealing to gardeners and non-gardeners alike, Can You Dig It? features a powerful love song to Alan Titchmarsh, the world’s first rap battle between a gardener and a slug, and a virtuoso performance on a cucumber trumpet.

The show will be in Lambley for one night only, brought to the village hall by the Lambley Arts Festival with the support of Nottinghamshire Village Ventures. More information from http://can-you-dig-it.co.uk

Suitable for all the family, Can You Dig It? lasts about two hours including an interval – during which delicious refreshments will be made available by the Lambley WI. Tickets cost £8 for adults, £6 for children/concessions, or £25 for a family, and are available from the ticket hotline 07914 942019.

In a special pre-show treat, Jo Stephenson and Dan Woods will hold a free Make Your Own Cucumber Trumpet workshop in Lambley Village Hall at 6pm on the evening of the performance (Sat 9 March 2013). Even the cucumbers are free. Please call the ticket hotline (above) to register your places min the workshop when buying tickets. A taste of what’s in store is shown below: