MARKING St Patrick’s Day (approximately), Oxton Projection House will hold its Irish evening in the village hall on Friday 22 March 2013 with food, music, a cult Irish movie, and a choice of Irish refreshments. 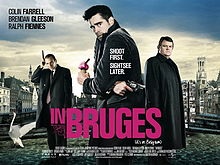 The cult Irish film In Bruges (18) will show at 7.30pm (doors open 7.00). Starring Brendan Gleeson, Ralph Fiennes, and Colin Farrell, this black comedy tells a story of incompetent hitmen who are sent to lie low in Bruges after a bungled murder. The film follows the two as they explore the Belgian city while awaiting further orders from their boss.

If the craic’s good, stay for an Irish ceilidh from 10.00pm to midnight. The band Wholesome Fish are guaranteed to get everyone up dancing, say the organisers. With influences spanning a world of tastes – from Celtic and gypsy-rooted folk through to Cajun, bluegrass, boogie-blues and punk – the Fish have their own distinctive and powerful sound.

Hungry and thirsty patrons will be catered for with large helpings of Irish stew, Guinness, and Jameson Irish whiskey. Those who like their films in cinema-style surroundings won’t be disappointed, we’re told. With a large screen and high-quality sound equipment, this is said to be a first-rate cinema experience. There is even popcorn, ice cream, and non-alcoholic drinks on offer.