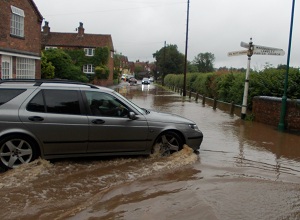 Lambley has flooded several times in recent years, including this occasion in July 2012

THE SPATE of recent floods in the local area has prompted Lambley Parish Council to organise a public meeting to discuss flooding in the village.

Members of the Parish Council will be joined by representatives of the Environment Agency, Nottinghamshire County Council, Gedling Borough Council, and Severn Trent Water.

Sherwood MP Mark Spencer, a Lambley resident, has also indicated that he will attend.

This meeting is open to the public.

FURTHER UPDATE: This meeting is now likely to be held on 24 June 2013, according to a report in Lambley Parish News

3 comments for “Meeting to discuss floods in Lambley (updated)”