THE PROPOSED crematorium and cemetery at Catfoot Lane Lambley has run into trouble with the announcement by Gedling Borough Council that it will not ratify last week’s planning committee decision. 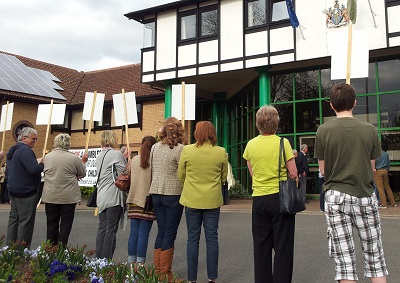 Opponents turned out in force to lobby the planning committee, but attention has now turned to alleged procedural errors

This latest twist is in response to a move by opposition group CCOG to seek intervention from the National Planning Control Unit (NCPU) over alleged procedural errors in the planning process. CCOG has encouraged opponents of the plan to lobby NCPU, and has produced pro-forma letters which can be used to outline the issues.

Copies of those letters were distributed to some homes in the area [I never got one –Ed] and made available in various forms here on dumbles.co.uk.

CCOG now says that personalised letters would be more effective than pro-formas, and is inviting residents to make their own intervention.

Nevertheless the volume of letters already received appears to have had the desired effect. The case officer at NPCU has spoken to Gedling Borough Council, which has agreed to not ratify the planning committee decision until the unit has looked into the matter. The NPCU has the power to ‘call in’ a decision if it believes there are sufficient grounds, which would effectively take the decision on the crematorium and cemetery out of the hands of Gedling Borough Council.

CCOG is now asking residents to write to the NPCU by post (National Planning Control Unit, 5 St Philips Place, Colmore Row, Birmingham B3 2PW) or email (npcu@communities.gsi.gov.uk) making whichever points they feel are relevant. It says these may include:

In a further, unrelated, development, underground groups Anonymous and Occupy have stated that they plan a protest against development on Catfoot Lane. Few details have yet been released, but will be reported here when available.