LAMBLEY Parish Council has re-arranged a meeting about flooding problems in the village, originally scheduled for April. The meeting will now be held on Thursday 27 June 2013, starting at 7pm at Lambley Village Hall. 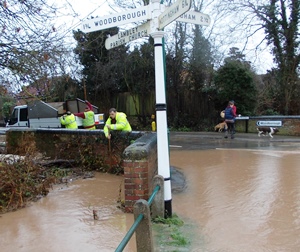 The council invites all residents and others with an interest to attend the meeting.

Along with members of the parish council, the meeting will be attended by Andy Wallace, Flood Risk Manager at Nottinghamshire County Council, John Evens, Direct Works Manager at Gedling Borough Council, and Dave Woolley of the Environment Agency.

Local MP Mark Spencer will also be there, as will a representative from Severn Trent Water.

The meeting is prompted by a series of floods in the village and surrounding areas in recent years. It was originally scheduled for April but postponed because it might have clashed with the Gedling Borough Council planning meeting that would consider the applications for crematoriums in the village. In the event the planning meeting was also delayed, and finally held last week.