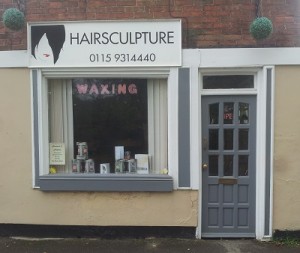 Salon has been a Lambley fixture for decades

After several months under threat of eviction, Hair Sculpture hair salon in Lambley is to close this week. A message received from owner Sally Melbourne confirmed that the hairdressers will have to leave the premises on Wednesday 8 October 2014.

Sally has revealed that she has found new premises, and will be moving into Raffles at 95 High Street Arnold on 13 October. This is opposite the Asda indoor car park (free for two hours, but ticket must be displayed). The existing mobile phone number will remain in use, and the new landline for the salon will be 926 0560.

The loss of the popular salon will be another blow to the communities in the local area, coming after the closure of Woodborough Post Office and News in July 2014. That closure was the result of changes in Post Offic structure and a lack of sales, according to a notice placed in the window. The building currently carries a For Sales sign.