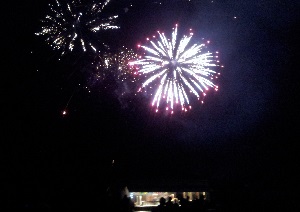 The scene at Lambley this evening

LAMBLEY’s annual firework display attracted record crowds tonight, marking a triumphant return for the event. Community fireworks were absent from the village in 2013, to the disappointment of many, after changes in Lambley Primary School PTA left nobody prepared to take on the organisation of the event.

Main Street was badly congested with parked cars and two community police officers were kept busy keeping traffic flowing. Gate receipts are not yet known but are expected to be substantial, with queues of people lining up at the school gates for admission.

Inside, a large bonfire roared while crowds estimated in the hundreds made good use of the beer tent and catering concessions. A 15-minute firework display was felt to start slowly but built to a spectacular climax, with many people commenting on its success.

* Woodborough fireworks are to be held on Wednesday 5 November on Governor’s Field, opposite the Four Bells.