Despite being officially opened yesterday, Saturday 28 March 2015, the gates to the new Gedling Country Park have remained firmly locked today. 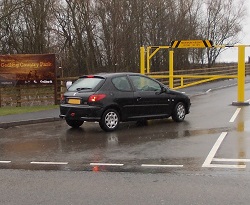 Yesterday’s ceremonies went ahead successfully, despite rain showers during the unveiling of the plaque and generally blustery weather throughout the day. Hundreds of people visited to see the new park and enjoy performances from local choirs and brass bands.

Today, however, the main gate to the car park on Spring Lane has been locked. dumbles.co.uk witnessed several drivers attempting to gain access and expressing frustration at the closure. As many as eight cars have been seen parked on Spring Lane opposite the gate, presenting a significant road traffic hazard.

The Gedling website states that the park opens at 08.00 ‘every day’.

Yesterday’s weather was at its worst during the opening formalities, with the mayor of Gedling councillor Jenny Hollingsworth joking that her hair was being ruined. She fared rather better than the council leader John Clarke, who we are reliably informed suffered a fall on the way back to the main marquee and was as a result unable to deliver a speech.

UPDATE Monday 30 March: dumbles.co.uk has been informed that the gates remained locked as the result of ‘human error’. It seems that the person delegated to unlock them failed to do so because of the poor weather. We are told ‘this mistake will not happen again’.